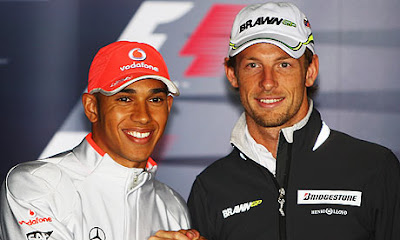 A bit of four wheels rather than two but when it involves the first time in Formula One history that a team has started the new season with a line-up featuring the two most recent world champions, and is the first pairing of two British world champions since Graham Hill partnered Jim Clark at Lotus in 1968 it has just got to be posted here!

Jenson Button vowed to make the proud after joining Lewis Hamilton at McLaren to form an all-British line-up. Jenson added, "It's fantastic that we'll be forming an all-British line-up. I know that we both fly the flag with pride and I sincerely hope we can make the whole of the , as well as Vodafone McLaren Mercedes fans across the world, proud."

Good luck to you both JB and Lewis for the twentyten season as we know its gonna be a cracker that’s for sure!

Posted by Battistinis Custom Cycles at 2:08 AM