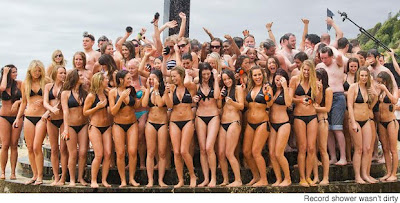 Well we are glad to live by the beach is all we can say. And sorry to all those that may have had to put up with the phone not being answered the other day but we were as can be said, otherwise engaged when a group of bikini-wearing girls have lathered up on Bournemouth beach in a bid to help set the world record for the most people to shower together.

The 152 people - led by the group of Lynx girls - beat the previous American record of 145 people, despite the chilly weather conditions.

Stripping down to their swimwear, the record breakers lathered each other up under a giant six metre tall shower which had been specially constructed for the attempt.

Record adjudicators were pleased with the water and soap levels… as were the man who took part and for some reason tried to push their way towards the Lynx girls, we can't imagine why.

Anna Orford, of Guinness World Records, said: "Lynx have constructed a fantastic showering tool, and the people of Bournemouth have to be applauded for getting into the spirit of the day and taking a shower together.

"Their reward is a new Guinness World Record for the most people showering simultaneously at the same venue. Congratulations to everyone involved!"


Posted by Battistinis Custom Cycles at 4:49 AM