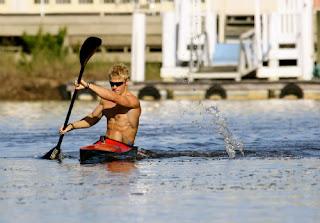 Our good friend Ben Brown who is already twice ‘World Marathon Champion’ in flat water canoeing, sent us a mail the other day to say “Now it’s time for something new… into the real world I step!”

Ben has an appetite for perfecting the art of no matter what he gets involved with so we were intrigued to see what he meant! Basically he is one of those people who excel’s in whatever he undertakes. Then to make us mere mortals feel even worse for ourselves, Ben is only 25 years old, has model good looks, has travelled the world several times over, is a two times world kayak champion and is now bloody good at making music videos!


His first video is above and this is the text to go with it: New Video out! Not a canoeing video but my first music video... it's a cover of Ed Sheeran's 'Lego House' By The Lost Audio... It's all shot on Canon 5D & 7D DSLR's. What do you think?


To View more of Bens work and contact him, go here:
http://benbrown100.tumblr.com/

Posted by Battistinis Custom Cycles at 2:54 AM