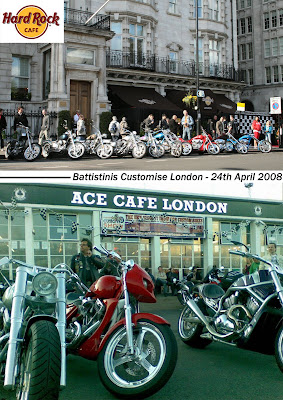 Sorry to the folk that we left with neck ache from the constant head turning that you all had to do and also for bringing the streets and sidewalks of the capital to a grinding halt at times!

Further photos and write up to follow, after we go clean our bikes with the finest cycle care product range available, S100 of course!

Bring on the summer!

Posted by Battistinis Custom Cycles at 4:34 AM 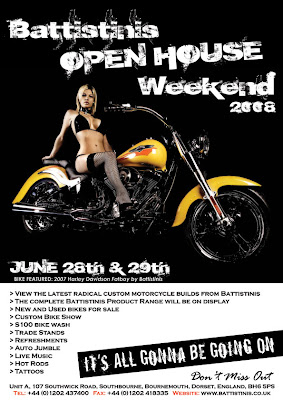 Battistinis 2008 Open Weekend . . . . . . . . .
Quicker than we know how a whole year has nearly already flown past since our Open Weekend last year! After the massive success of turning the event to both a Saturday and Sunday in 2007, it’s the same way as things are to be run this year for 2008!

Two complete days of all things custom! View the latest unseen Radical builds that we are in the final stages of completing and rest assured a whole lot more!

And to find out exactly where we are,

CLICK HERE to be taken to Battistinis on Multi Map

Posted by Battistinis Custom Cycles at 5:47 AM

Thursday the 24th April will see a fleet of what we have know best for to hit the roads of ! Hopefully the sun will shine out in force and if it does watch out as we will be too! Battistinis original Custom bikes galore!

We will be getting down to the Ace Café in the evening, come and say hi and see what we have been up to lately and keeping us busy!

Posted by Battistinis Custom Cycles at 5:40 AM 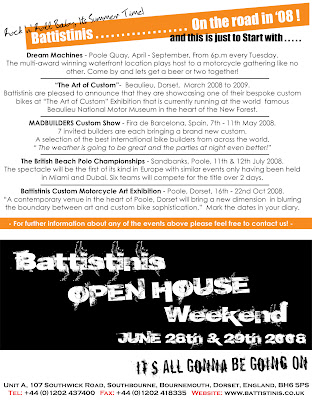 As good as it is to read a story or see a picture!
It’s a whole other deal to see the real deal!

Come see our bikes throughout the summer and let’s have a beer or two together. See above a few events/dates that you must pencil in your diary that we will be showcasing a selection of our builds!Let’s Rock ‘n’ Roll! Its summer time

See you on the road
(Click the image below to open it up larger and where we are gonna be!)

Posted by Battistinis Custom Cycles at 5:38 AM 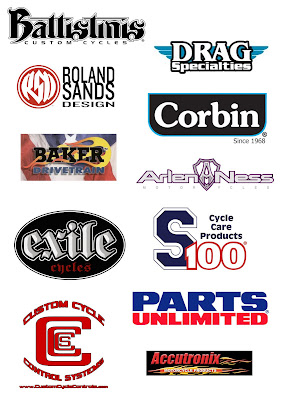 We have names, we have faces, we ride bikes, we build bikes, we love bikes!

We answer the phone ourselves, not with an automatic electronic voice to tell you to wait. We work long days yet however if you try to get through late at night as that is your only chance to call us, leave a message and WE WILL get straight back to you!

Send us an e-mail and we will reply. Better still thou take some time out and come and visit our showroom. We can utilise years of experience in the industry to advise you the best way to upgrade and customise your bike! Let’s sit down, grab a coffee (donughts if you’re lucky!) and get the correct parts that you need and want. Be it from a simple cable guide to a complete styling overhaul we have it covered and will not compromise on a single thing!

The communication and contact that we have between the brands that we offer is second to none and ensures that we can offer you a fast, efficient and reliable service on all parts and accessories from our suppliers! If you want to be directed to one of our leading stockists throughout the country contact us and we will send you right their way!

Posted by Battistinis Custom Cycles at 5:35 AM 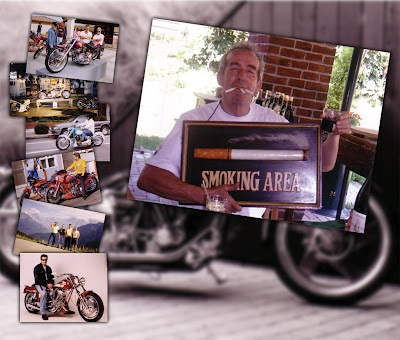 Spring has brought out more than the brush and dustpan in the Battistinis Showroom. From the magical folders that live unopened at the back of the filling cabinets to the dust covered cardboard boxes up in the roof space that last saw the light of day a few years back have all been pulled out. Oh boy what beauties we have unearthed. From a mountain of photos to dig through and have a right old laugh at.

Scanning duties are now in place and are starting to get the sweat bead on many a persons brow as which of the beauties are to be used in upcoming promotions still remains the question!

Now with the digital age more paramount than ever before help us to add to our image collection. If you’ve got some shots of you out their riding please feel free to send them through to us as we would love to see them all!e-mail them to: sales@battistinis.co.uk

Posted by Battistinis Custom Cycles at 5:24 AM 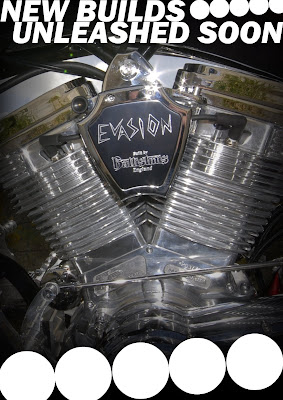 Keep your eyes peeled and your ears pinned back.

WOW! Where does time go, that’s the question! Building bikes is one thing but keeping on top of the latest builds is another one altogether! We have some real beauties, both radical builds alongside a string of customised Harleys that have been completed and are currently being put through their paces under the spotlight and in front of the Kodak.
As they say ‘Watch this space!’Wanna turn your ideas and dream into a reality!
Get in touch:

Posted by Battistinis Custom Cycles at 5:20 AM 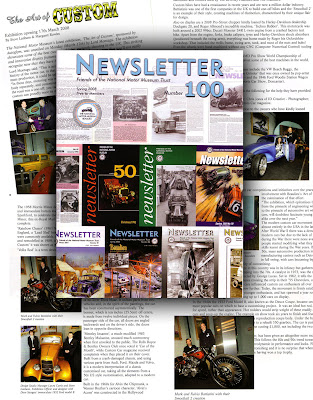 Battistinis are proud to announce that Beaulieu, The National Motor Museum has included a Battistinis ‘the Smooftale’ custom bike in their latest Exhibition to be unveiled to the general public, being titled ‘The Art of Custom’.

The latest Newsletter from Beaulieu is out now and highlights ‘The Art of Custom’ exhibition alongside all other events, festivals and happenings occurring in this unique venue throughout the year.

Beaulieu is set in the heart of the just down the road from us, so why not drop by our shop on your day out!

Posted by Battistinis Custom Cycles at 5:18 AM 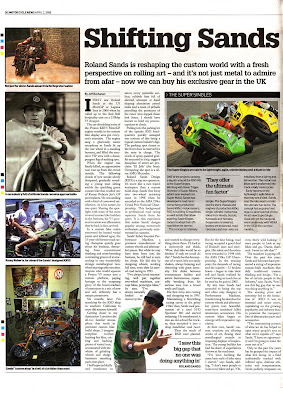 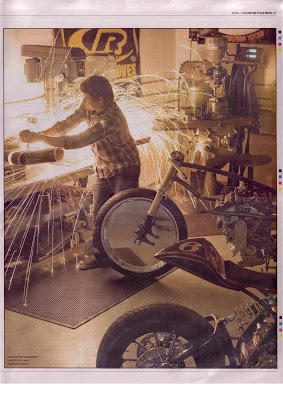 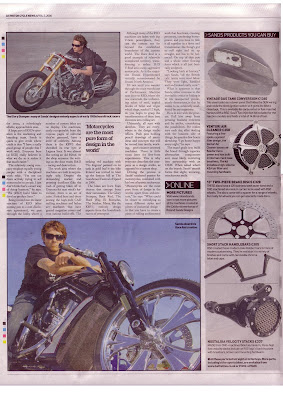 Roland Sands Design . . . . . . .
Roland Sands Design, RSD to those in the know is most definitely firing on all cylinders and at full throttle at the moment. Be it for a Sportbike or V-twin RSD have it covered! Pick up a copy of last weeks Motor Cycle News (MCN) to see what MCN had to say about RSD if you don’t want to take our word for it!

The article focuses on the ‘Super Singles’ project that RSD have conceived and also the true philosophy of what Roland sands and his team are all about!

RSD’s mission is to create the best motorcycle products in the industry without regard to the bikes beginning. They walk the line between custom and performance bikes and deliver the best of both worlds. RSD want to help you create your vision on two wheels.

‘Be inspired, build what you want and ride it as hard as you can’.

Posted by Battistinis Custom Cycles at 5:04 AM 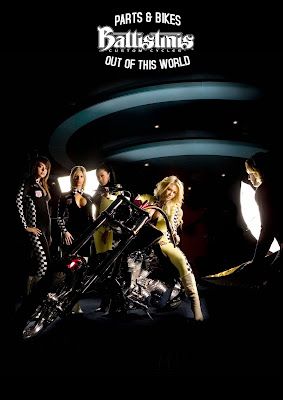 BATTISTINIS, PARTS OUT OF THIS WORLD!!!

Battistinis Custom Cycles, based in , are ecstatic to announce that they have been selected and are now established as a key supplier to the National Space Program for the latest , Prestige that is due to blast off in 2018.

National Aeronautics and Space Administration Organization, tasked with implementing the National Space Policy established on previous missions that the broadening vision of space activities shall contribute a major significance to the future of all Space exploration.

In an attempt to reduce overall mission costs and maximize on each mission, Space exploration must be aimed at extending the human presence throughout the solar system. The development of the new Battistinis two person motorcycle styled Crew Exploration Vehicle (CEV) was an urgent requirement to the mission program.

NASA required to land the two person human crews anywhere on the Moon's surface and allow the CEV to transport the pair to any given location. One of NASA's reasons for going back to the Moon is to demonstrate that astronauts can essentially "live off the land". The utilization of this new Crew Exploration Vehicle, equipped with the complete will allow this must needed solution and ensure that it is undertaken in utter style. The CEV that has been created is to be unveiled at the Las Vegas 2008 S.P.A.C.E Exhibition.

A L.O.O.F agency spokesperson stated that "This is a huge and very ambitious space program, Battistinis have been selected to equip the CEV with its complete line up of parts as the vehicle that has been developed is based on the American V-Twin and without doubt the Battistinis range is at the cutting edge of the motorcycle industry.

s stated, “When initially contacted by the agency we could not believe the challenge that was being asked and have been working intensely and in partnership with all involved. Now having stepped up to the agency’s envisions we are poised to turn a new chapter in the custom bike industry with the departure of what one would expect is achievable. The projection of the challenge is immense yet the sole objective here maintains for the truth not to get In the way of a good old story.”

Please do not hesitate to contact Battistinis should you require any further info about this unbelievable event or the that is NOW AVAILABLE!

Posted by Battistinis Custom Cycles at 3:30 AM