BUB 7 is now the fastest motorcycle on the planet * Chris Carr set a new FIM world record & AMA national record at 367.382 mph thru the mile with an exit speed of 372.534 mph at the Cook Private Meet at the Bonneville Salt Flats Utah.

That's 538 feet per second and 5 football fields in 3.3 seconds. To make it a world record you have to back it up within 2 hours the opposite direction thru the measured mile.... All we can add is nice one BUB Racing!

See and read more about this true feet of engineering at:

Posted by Battistinis Custom Cycles at 6:21 AM

Battistinis, Sometimes things are just too good to ignore. . . .

Battistinis, Sometimes things are just too good to ignore. . . .

Sometimes things are just too good to ignore when you come across them!

In a time when you are swamped in moving media more than ever before from television to the internet its amazing to find something that is soooooo much better than anything else out there! It may not be related to us of custom but check out the video below! One word, amazing!

In the video The Westpac Rescue Helicopter Service that since beginning service in 1973 have carried out more than 21,000 missions ranging from urgent patient transfers to dangerous search and rescue missions.

The Service depends entirely on the generous support of sponsors and the community to stay flying. So if you want to do something good today, donations can be made here: http://www.lifesaver.org.au/funding_challenge/donate.html

In or eyes, well worth it!

Posted by Battistinis Custom Cycles at 5:34 AM

Email ThisBlogThis!Share to TwitterShare to FacebookShare to Pinterest
Labels: are, Battistinis, good, ignore, just, Sometimes, things, to, too 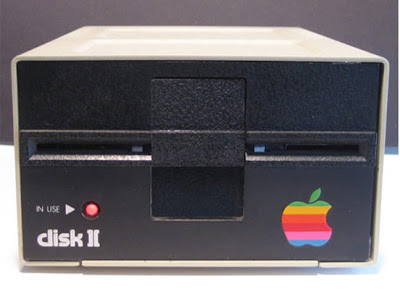 Well today brings one of those jobs that nobody likes doing and is always the one to get shelved at any given chance, yet its no better or worse day than any other to start so we may as well get on with it! Over the last twenty years we have gathered together a pretty serious media press database that we fire out updates, press releases and god knows whatever else to! Over these years we have seen lots of magazines, websites, blogs, e.t.c come and go and also and so a no doubt some huge gaps in our database details!

Basically, when 2010 hits we are kicking it up a massive gear and doing so have started today to update our complete press database. If you are in the media (tv, radio, print, internet e.t.c) or know of anybody in it that you feel should be added to our list please feel free to fire there names our way! Don’t be shy of contacting us if you are not in the custom industry as in truth we like to share our bikes and news outside of the custom world as much as in it! Get in touch with us at ant@battistinis.co.uk and we ill be in touch straight away with news of bikes builds, parts and all of our other latest happenings before they are available anywhere else!


Posted by Battistinis Custom Cycles at 9:09 AM

Simply put S100 is the number one cycle care and maintenance range out there. If you want to get some hooky, below par, mystery bottle of stuff to spray all over your pride and joy that’s really up to you! Good luck, we hope it works but when it comes to our own bikes S100 is our only choice. We thought that re-producing the S100 catalogue in Italian for everyone in to know what they are missing out on would be on a good idea, so here it is!

Contact us to be directed to your local stockist of the genuine S100 range of products!

Posted by Battistinis Custom Cycles at 4:21 AM 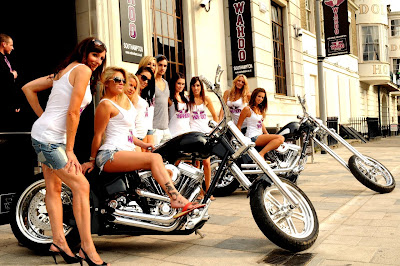 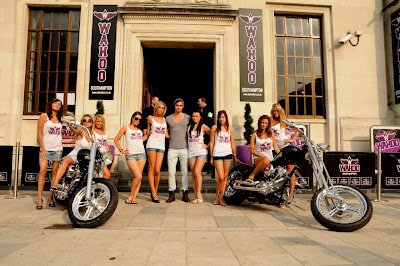 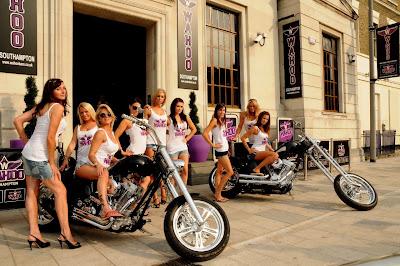 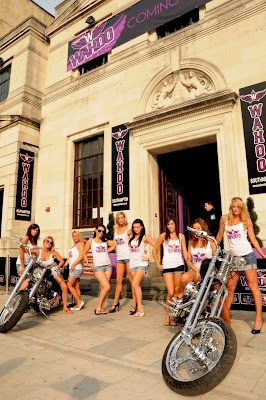 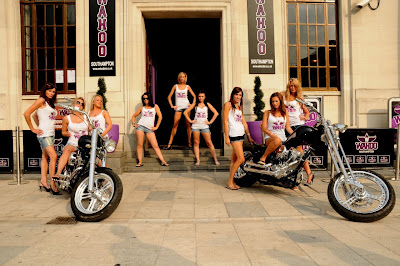 Wahoo is the place to be if you are looking for a Sports Bar, Late Lounge, Bar and Grill and much much more! As we said yesterday on this very blog it had its opening launch party last weekend that went down an absolute storm!

Fresh into our email inbox this morning were these beauties from the weekend! Bet you wish you made it down now!!!! Keep your eyes peeled to this very blog to see where and when we will be unleashing and hitting up next with some steeds!

To find out more about Wahoo Southampton simply click the link below:

Posted by Battistinis Custom Cycles at 2:49 AM

Mental, that’s all we can say about the European Bike Week in Faak See this year!

For the 12th time, from 8 - 13 September, the tiny of in the Austrian was the scene of an awesome festival of everything Harley-Davidson®. All around the lake visitors found music and entertainment that covered every taste while the in Faak itself formed the centre of the 12th Anniversary celebration of 's greatest open free biker festival. This year there were more traders, more entertainment areas, new features and a whole lot more!

Go to http://www.europeanbikeweek.com/en/home.asp to find out more about this years event that truly was unbelievable! Pencil in the dates in your diary for 2010 as we had a ball of a time in ’09 and are going back for another hit next year! If you want to know more about what we are thinking of planning get in touch as you will not want to miss out on this one we can assure you!

Posted by Battistinis Custom Cycles at 7:35 AM 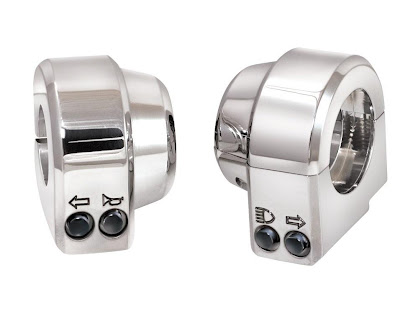 As soon as one thing is created its time for the next! This is the case for everything in life but especially for our very own parts collection! As can be seen on this very blog and within the motorcycle press across the world the complete parts collection is continuing to grow day by day. With the arrival earlier this year of our very own handle bar controls we were beginning to realise that we had a missing link to allow you to fully transform your handlebar set-up. Well now the wait is over and our all new Battistinis Handlebar switch housing has arrived! Manufactured to the highest possible standards in the from 6061-T6 aluminium and available now!

Don’t miss a turn, contact us today to clean-up your bars of those clunky plastic monsters that currently wrap themselves around your handlebars!

Posted by Battistinis Custom Cycles at 7:33 AM 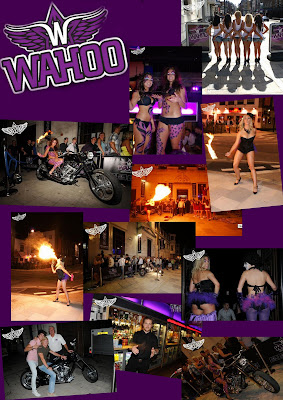 Wahoo is the latest edition to the social scene! Wahoo is the place to be if you are looking for a Sports Bar, Late Lounge, Bar and Grill and much much more!

To launch the brand new venue over the weekend of 18th – 20th of September Wahoo called upon Battistinis to set the scene and deliver some bikes like no other and what a storm they went down!

Find out more about Wahoo Southampton at:

Posted by Battistinis Custom Cycles at 7:23 AM

Email ThisBlogThis!Share to TwitterShare to FacebookShare to Pinterest
Labels: at, Battistinis, Southampton, Wahoo 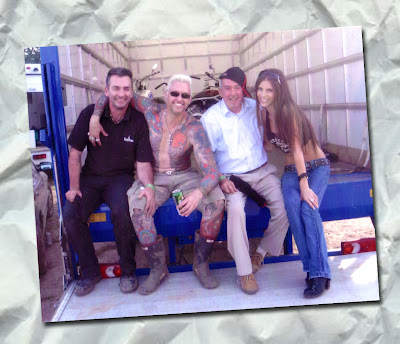 
The eagle eyed cherries amongst you will have noticed that we have been without an update for well over a week! Where the hell does time go is simply the reason why we have not been blogtastic as of late. However rest assured that we have been upto a heap of other happenings outside of this very cyber world that will come apparent over time! Its been heads down and charging on with some real sweet projects if we don’t mind saying ourselves!

From the start of October onwards traditionally always sees the winter wrenching start on the following years projects! We are now awash with some rather large boxes containing frames, forks, engines and just about every other component you need to put together some rather truly kickass steeds!

When time flies past so quick you start to forget some of the things you have been upto throughout the year, being that they begin to feel something of the distant past. One great event this year that no sooner was it here that it was gone was the 2009 Bulldog Bash. Memories came flooding back when our good mate Russell over at Exile dropped us a few pictures in the post and this one summed up a summer of good times in a single snap!

Real nice to get something through the post other than a bill that’s for sure, cheers Russ!

Check out the latest Exile happenings by clicking here:

Posted by Battistinis Custom Cycles at 7:19 AM 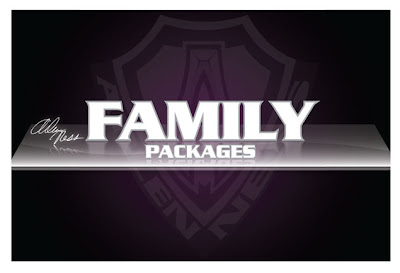 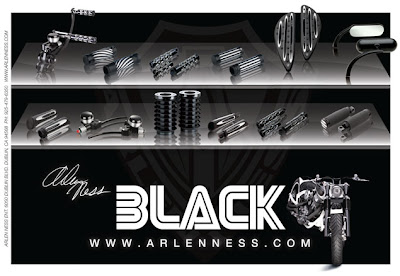 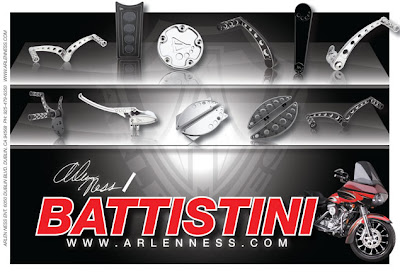 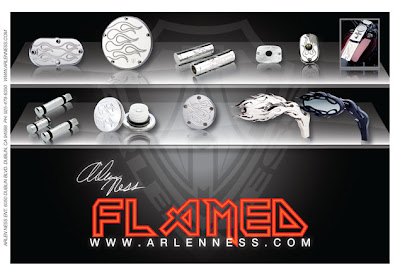 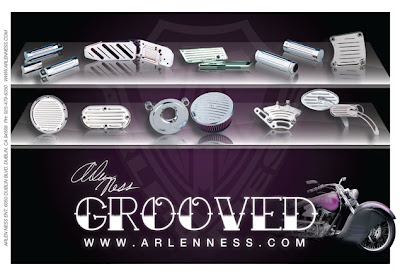 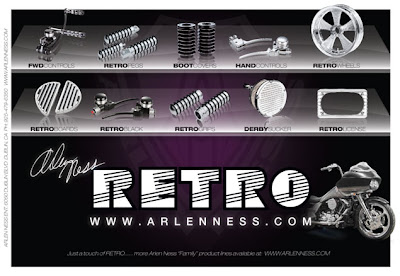 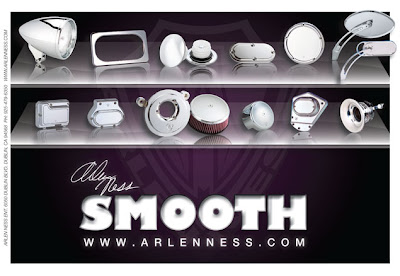 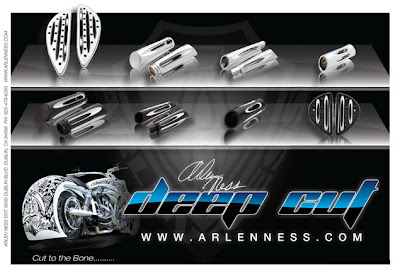 Arlen Ness continues to give riders more choice for "show and go" accessories and now unleashes The "Family Pack" program. This program is based around families of parts that can cost effectively transform a stock Harley Davidson into a true work of art. With a multitude of grip, peg, latch covers, gas caps, dash cover and control styles, an ordinary Harley can be customized to fit the feel and style of it's owner.

Product Families included, range from the NEW Arlen Ness Deep Cut line, BLACK and Battistini line and RETRO line to the ever popular Smooth line, Flamed line, Grooved line. So if you want to stand apart from the crowd and have your bike that bit better than the guy next to you at the show simply get in contact with Battistinis today and we will direct you to your closest leading European Arlen Ness stockist!

To those who have lived under that rock and Arlen is new to you, keep reading!

1967, Arlen buys his first motorcycle, a 1947 Knucklehead®. Working in his own garage armed with only a spray gun and a vision Arlen stripped his motorcycle and gave it a full custom paint job. Shortly after, Arlen entered his first custom bike show and took first place; the first of many to come. Spending the nights in his garage working on an ever-growing list of customers' bikes Arlen realized it was time to quit his day job working for a private contractor and open a store. Renting a store space on East 14th in Arlen opened Arlen's Motorcycle "Ness-ecities". In the beginning the store was only open at night giving Arlen time to paint and work on bikes during the day. Soon demand for Arlen's "Ness-ecities" became too great and the store had to be opened full time. Following in his father's footsteps, Arlen's son Cory designed and built his first bike in his mid-teens. Together they made Arlen's Motorcycles “Ness-ecities” a hug success throughout the eighties and nineties resulting in several relocations into progressively larger stores. Now in 2009 Arlen Ness is considered as ‘The King of Customising’ and looking back at history its for good reason!

Posted by Battistinis Custom Cycles at 3:16 AM