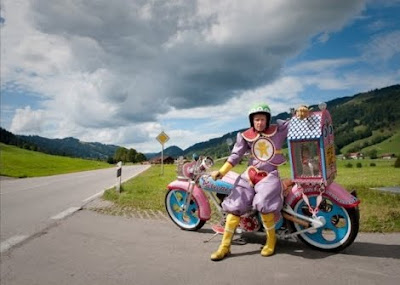 If there is only one thing you do tonight (Tuesday 1 November) it should be to tune into BBC ONE at 10.35-11.35pm and to watch the first part in a new series called Imagine – This week it is all about Grayson Perry and his stunning exhibition at the British Museum titled “The Tomb Of The Unknown Craftsman”. Why tune in you may ask???? Simple, as it will become very clear when you see Grayson aboard a rather creative custom build called AM1.

The new season of BBC One's Imagine begins with Grayson Perry – The Tomb Of The Unknown Craftsman. Over a two-year period, Imagine has had exclusive access to the creation of Perry's latest exhibition at the British Museum. This unique portrait of the artist at work sees editor and presenter Alan Yentob delve into Grayson Perry's childhood, join him on a motorbike pilgrimage to Germany and follow him as he explores the artefacts in the British Museum's collection which will inspire his own exhibition.

Throughout this period, Perry has been given free rein to choose items from the British Museum's extensive collection of more than eight million objects to feature in his exhibition alongside his own creations; from his trademark ceramics to sculptures, tapestries and even a working motorbike. The resulting exhibition, The Tomb Of The Unknown Craftsman, is his most ambitious show yet.

Posted by Battistinis Custom Cycles at 4:14 AM

Email ThisBlogThis!Share to TwitterShare to FacebookShare to Pinterest
Labels: Battistinis, Craftsman, of, the, Tomb, Unknown